An edited version of this post was published by SBS News here.

There was a laneway that ran right next to the house I grew up in Prospect. Rusty corrugated iron and aged bitumen created a corridor we would tear up on our Malvern Stars. The laneway was our secret place – we’d use it for hide and seek, as a shortcut to the park, a skateboard track as our kelpie Minki pulled us along at full speed. One day, just like any other day, my little sister and I were walking back from the park through our laneway and found the walls spray painted with the words ‘ANC terrorists out’ in heavy, black dripping ink.

Soon after, while an ANC meeting took place in our house, our cars out the front were decorated with the same hate. This time in red, but still the same thick, angry, hateful paint. I think I was 8, my little sister 6. We had heard the word terrorism before but I couldn’t reconcile it with the peace our parents campaigned for in South Africa – the birthplace of my father. Surely, the terrorists were those perpetuating apartheid?

And then it dawned on me that the spray painters were calling my family terrorists. Two state school teachers and their two small children, two guinea pigs, a dog, a cat and some fish, living in a quiet suburb in Adelaide. I was shaken. I can remember feeling like we were being watched, like I had some sort of sign on me, like something that we were doing was wrong. When people asked me where my family was from I started to only say Australia.

Inside the protective walls of our home I loved being part of the expat South African community – made up at that time of freedom campaigners who had found their way to Adelaide by false passports and other means when they were given no other choice. We danced to the music of Soweto. We ate bobotie, gnawed on biltong and sang along to Free Nelson Mandela by Jerry Dammers and the Specials. I knew even then that Mandela was a critical figure in my life and in the life of my family.

A very brave man, someone who is fighting for justice, replied my parents.

I found out Mandela was locked in jail for having the wrong colour skin and for fighting back against this.  My parents explained how apartheid worked and what racism does to people’s lives. I became a crusader as a kid. I wore my commitment to social justice on my sleeve – I spoke up, I refused to engage in conversations with other kids that I felt were hurtful of others.

In 1989 we paid our first visit to South Africa as a family. I was 11 and my sister was 9. My parents had been previously for their honeymoon in the mid-seventies and had been trailed by the South African secret police throughout their trip due to my dad’s involvement in the anti-apartheid movement. I had heard this story and was scared.

South Africa seemed a normal, even familiar place. My white family lived in big houses just like we did in Adelaide. The streets were lined with purple jacarandas set against red brick. People ate burgers at Wimpy which was just like Hungry Jacks, they shopped in supermarkets and flocked to the rugged, beautiful coastline that looked just like South Australia’s.

One day we were shopping in Eshowe when we saw police arguing with a man on the street. Suddenly they began using force to bundle him into the back of a police car. The car was a hatchback and they opened the boot, violently pushed him in and held him down while the boot was closed. My parents tried to shield us.

From that point on something ominous hung over our trip. I began to see things, put it all together and understand what all those meeting at our house had been about.

When we got back to Adelaide my Dad showed us the film Cry Freedom and explained how we worked with Steve Biko when he was a student at Durban University as part of the anti-apartheid movement. After seeing the film I became overly sensitive, even touchy on the apartheid subject. I was overwhelmed with the injustice; angry. My dad explained some of the things he had experienced, what had happened to friends. I thought of Mandela still in his cell on Robben Island. I couldn’t understand how this was happening in my world.

We didn’t have to wait long for change. In 1990 Mandela walked free from prison and in 1994 he became the first president of a democratic South Africa. I learnt the words to Nkosi Sikele’ iAfrika and sang it with my sister while waving the new, colourful South African flag. I started to tell people that I had a connection to that place again. Proudly declaring that the new South Africa had eight different national languages and that I had once met Bishop Desmond Tutu.

Watching Mandela take the stage after that election I understood that his lesson was that there is power in one person to make a difference and that standing up for other people, especially those that were disadvantaged, was the best way to be. That forgiveness, humility and compassion was what true leadership was all about. Also, that sometimes force against injustice may be necessary.

By 2000 I was studying honours in politics and completing a thesis on the South African Truth and Reconciliation Commission. My politics and my passion continued to get me into trouble, I was repeatedly called “uptight” or “too politically correct” or the “fun police” whenever I challenged friends and acquaintances on a joke that was racist or prejudice or made fun of someone. The truth is I was uptight. Comments like these formed a knot inside me; they felt personal and damaging to the world. 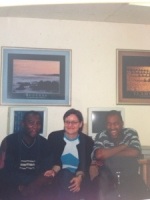 When, in 2001, and with a draft (never finished) PhD in hand, I returned to South Africa as an adult to work at the Centre for the Study of Violence and Reconciliation in Johannesburg the place was in transition. My white relatives were uncomfortable, a different form of violence had taken hold. Over six months I read through thousands of transcripts of the Truth and Reconciliation Commission – harrowing accounts of mothers and children and sisters and brothers and what was done to them. I read the accounts of perpetrators – some sorry for what they had done, others unrepentant. I visited Robben Island and saw for the first time Mandela’s tiny, uncomfortable cell and the exercise yards pointed at the Port of Cape Town – close enough to see a city getting on with its life but far enough away to confirm ostracisation. I wondered what South Africa would become and how it was possible for any place to come out of this.

Yesterday, another 13 years later, I learned of Mandela’s death on twitter and later in the news media. As I was driving to work I realised what an omnipresent figure he has been, not only for the world I grew up in, but for defining my values from that very early age. Values that continue to define me as an adult. Yesterday I also felt lost and disappointed with much of the false sincerity and fawning. Partly because I remember when Mandela was seen as a terrorist himself (with many of the people who perpetuated that now redefining him as a hero) and partly because we still seem quite happy to continue committing injustices.

South Africa, country of my blood, remains an example of how injustice corrodes a society, displaces people and impacts generations – but it is not the only one. Just because we hold Mandela up as a hero doesn’t mean we can turn a blind eye to what is still happening under our noses in regards to refugees, Aboriginal people, people with disabilities – it should not absolve us of guilt or of action or compassion. Even in 2013, 27 years after my sister and I discovered hatred in a laneway by our house, this ugly narrative continues to be played out again and again across the world. Surely Mandela’s legacy must be a commitment from all of us to finally write a new one.

Vale Mandela. You have taught me, and the world, so much.

8 thoughts on “The eight year old terrorist – Mandela and me”