I felt quite sure I’d like San Sebastián before I got there. Food and beaches are two of my absolute favorite things.

I liked it even more than I expected to and really didn’t want to leave. Here are the top 10 things I discovered (in no particular order)- there’s so much more of course, you really should visit and see for yourself.

I’m not comparing them to Australia as that would be unfair but San Sebastian had not one but three (La Concha, Ondarreta and Zurriola) white sandy beaches with waves which makes it the best beach town I encountered in Europe. Yes the beaches are crowded, yes they are not as clean as we get in Australia but there is something to be said for the communal sun worship that takes place there. Oh, and I think they have the topless bathing thing right – I love that young and old, fat and thin are all out there happy with their bodies. Why are you so prudish Australia?

Zurriola is the cleanest of the three and has waves, it was was described to me as the ‘hipster’ beach by a local. La Concha is packed, flat and calm and where most of the tourists hang. Ondarreta is the far side of La Concha. I tried all three – my tip, get in early as there is no space to move after 1pm if the sun is out. 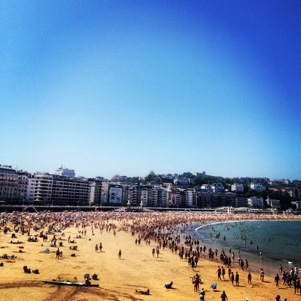 2. They haven’t bowed to tourists

There are tourists everywhere in San Sebastián but unlike Prague you won’t find them dominating the place. There are no ‘tourist’ menus here, in fact it’s often hard to find a menu in English at all. There is a real sense that San Sebastián is still there for locals, tourists are something they endure to make ends meet. It was a welcome break from all the sellers and scammers I’d encountered across the rest of Europe. I really hope it stays this way.

*Takes a deep breath* Ok, I know its inevitable to talk about San Sebastián food but everything they say is true – and more. I ate better in San Sebastián than I have anywhere else. Ever. Period.

The pintxos bars are like one extended set of canapé parties that you can saunter through at whatever pace you choose. As an added bonus you also get whatever you want cooked to order.

Old town contains a mix of traditional and modern bars – each serving their own versions of classics like steak
(Solomillo), foie gras and endless bacalo (cod) plus a dazzling array of other dishes.

The modern pintxos bars are experimental and borrow from the best molecular gastronomy schools to surprise and delight. The traditional bars serve fresh, tasty, beautiful prepared food that makes a hero of one key ingredient. All the bars I ate at we’re wonderful. Special mentions to the tasting menu I had at Zuruko, the Segovian Suckling Pig, Foie Gras and Scallop I had at La Cuchara de San Telmo. But really, you can’t go wrong in this town.

One thing to note, the dazzling array of food, the lack of English menus, and the crowds can be intimidating at first. As I was travelling alone I did a pintxos tour with San Sebastián food which was a great intro and covered 5 bars with a drink and 1-2 pintxos at each as well as critical information on how to ‘eat’ at a pintxos bar without looking like a hapless tourist (stand at the bar, only have 2-3 and move on, don’t fill a plate, throw your napkins on the floor when finished). The tour is fantastic but comes with a whopping price tag of €90 so if you’re with mates I’d forgo and enjoy the process of deciphering the menus together. If in doubt ask if they do a tasting menu – I found most of the modern bars do.

My main question, having seen pintxos in action, is why this has not become the way everyone eats all over the world. For me it was food perfection. 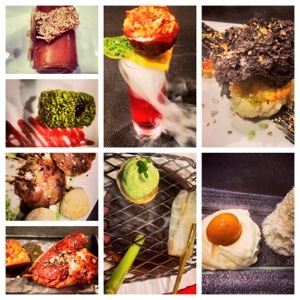 4. The place I stayed

I stayed at a gorgeous place called Pension Amauir which I picked randomly off trip advisor but which turned out to be located right on one of the main pintxos thoroughfares in the old town and smack bang between la Concha and Zurriola. In other words the PERFECT San Sebastián location. On arrival Eric gave me a great overview of the town and what to see plus a list of recommended pintxos bars and what to order at each. My double room was gorgeous and girly – I loved my stay here.

Txakoli the local white wine has an unique, dry briney flavor which I was told comes from the vines absorbing the sea spray. Waiter’s pour it from height, adding to the spectacle, so it froths and bubbles in the glass. It’s totally fitting for a coastal town like San Sebastián and pairs wonderfully with pintxos.

The basque call this txikiteo and it is the true way to sample pintxos. A drink and a couple of bites here and then move onto the next bar to sample new delights. All this is done standing at the bar, conversing with mates, the person standing next to you and the wait staff themselves. This view also gives a great vantage point from which to view the inevitable frenetic action of any pintxos kitchen.

Two things are key here – snacking means you rarely overeat, the walking means you won’t over drink. This isn’t to get messy but a wonderful gastronomic stroll through Basque culture.

San Sebastián is located in Basque Country – a region granted autonomy in 1978. The main language spoken is Basque and both culturally and aesthetically this feels like a different Spain. It’s mountainous, lush and green – a vast contrast to the more arid areas in Southern Spain with their olive and almond groves. The architecture feels more French. Having spent a lot of time south of Madrid, San Sebastián (Donostia) offered another perspective on Spain and again demonstrated the diversity of people, culture and environment that makes Spain such a great place.

Bilbao is also part of Basque Country and worth at least a day trip. Buses leave every half hour from San Seb and the Guggenheim is worth the trip alone.

This is 50% because I love the word ‘fenicular’ and 50% for the spectacular view when you get to the top. Height sensitive people take note – the fenicular is rickety and it’s path is steep. Once you get to the top there in an uninterrupted view of La Concha and a ‘trapped in time’ children’s theme park which is really quite adorable.

Most of San Sebastián was destroyed during the Seige of San Sebastián in 1813 which culminated in a fire that burnt the town to the ground. Only one street remained and I was lucky enough to stay on 31 de Agosto (so named because August 31 was the day of the fire).

Judging by this street, and my Pension’s wonderfully subsiding staircase, the old old town would have been spectacular. But the old town built in is place is also magic.

It’s small, wholly walkable, still populated by locals and there is a bar every 50 meters or so. At night it comes alive as locals and tourists chink glasses of Txakoli, consume bacalao, foie gras and copious amounts of bread and celebrate the wonder that is San Sebastián. 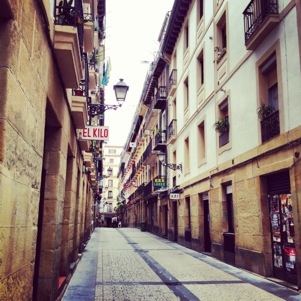 Mostly I loved San Sebastián because it is a social town. It reflects, in my opinion, the pinnacle of urban planning because it has supported a community that uses its public space and which celebrates being together. The streets are full of people and kids and dogs all the time. The chatter rises up the alleyways to the windows above to provide a constant reminder of togetherness.

I travelled alone to San Sebastián but everyday was spent with others – sharing tips on pinxtos, trying to decipher menus, joking with the wait staff, and mostly talking about why all of us, here in this place, had found a little slice of heaven through food and wine and the friends we made. 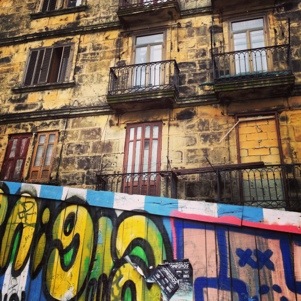 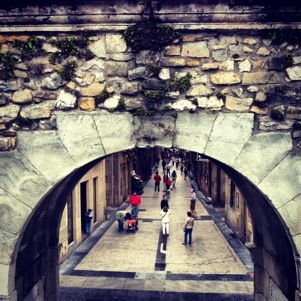 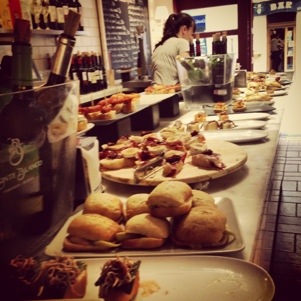 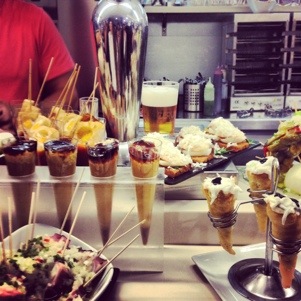 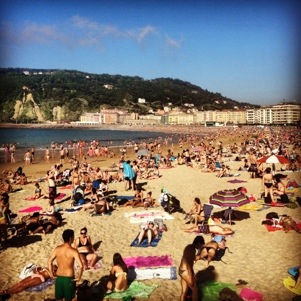 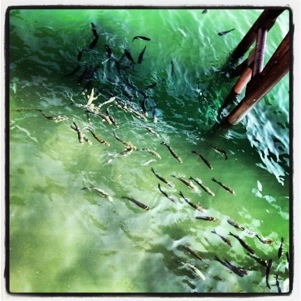 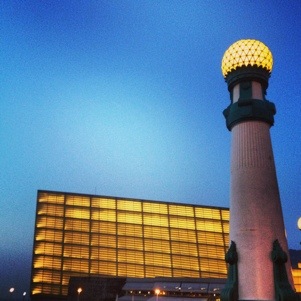 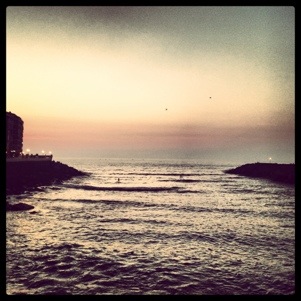